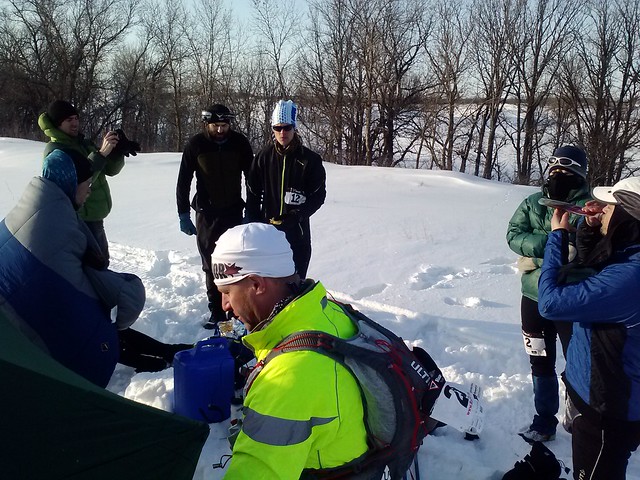 Racers feeding their inner demons at CP3 of END-SURE.

With summer spring not-winter on the horizon, it's time again to put your money where your mouth is and pick a "big hairy goal."  I think I first heard this term either from Andy or one of the good folks at Operacion Muerto, but I can't find any evidence of that.  All it means is a goal that's going to send you over the moon if you accomplish it.  Sometimes the planning and execution of these things can take years (summiting Everest, cycling around the world, etc.), but that's for the people I like to call (affectionately) "the real crazies."  If you're new to the game, pick something doable but hard.  Like the hardest thing you've ever done.  Or the most planning you've ever needed.  Or something you've failed at before.

One such BHG that requires no entry fee is the Operacion Muerto Summer Challenge 2013: a ride or run across Manitoba without using any paved roads.  Another in my local area is the Winnipeg-Grand Forks-Fargo ride (2013 details TBA; not sure if this will be gravel-only as well).  For touring cyclists, though, this stuff is easy.  For multi-sport athletes, perhaps the Minnesota Lowest to Highest Duathlon Challenge is your cup of tea: race from Lake Superior in Grand Marais to the top of Eagle Mountain (the highest point in MN) and back.

Personally, I'll be tackling the Lutsen 99er as proof that I can ride farther off-road than ever before, on this on a Surly Pugsley, as well as finishing a complete 24-hour adventure race at END-AR.  Are these big goals compared to other people?  Not necessarily.  Do they matter to me?  Undoubtedly.

You're primed and ready now: what's your Big Hairy Goal?