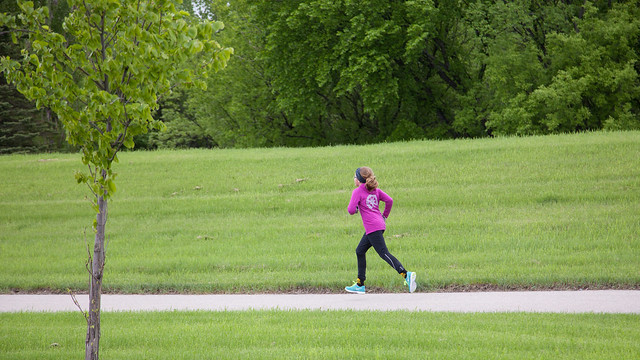 Some cities have an established hometown marathon, some have a classic 10K, others have a "everyone can do it" bike race, and Grand Forks has the Dewey Kvidt Memorial Duathlon (now including a 5K/10K).  I don't think I'm overstating my case by saying that it's one race pretty much everyone can get behind--on the way home we even drove by a bar that had an advertisement up on the marquee.

Although the race started the year I moved to Grand Forks, this was only my second time competing.  It's definitely been on the horizon and growing every year, spitting out some names you might recognize more recently from the Minnesota triathlon scene.  Last time I did the race, in 2011, I ended up fifth overall and, due to the no-double-dipping policy, third in my age group.

But let's stop right there.  Do you really want to read about my training and my race?  I didn't think so.

The Dewey Du is held in memory of Dewey Kvidt (who passed away in 2005) by his family.  It's a testament to his love of sport that they even began to go through the trouble of organizing such a race, and have kept it going for so long (this was the eighth year).  This year was the first year starting from the Choice Health & Fitness Center in south Grand Forks, so it meant less indoor space for everyone and more exposure to the elements before the race.  You know what?  Nobody seemed to mind--7:45 AM, intermittent rain, 20+ MPH wind, and a bunch of us shivering under some large tents in the parking lot.  I've been to races with better weather and more miserable people; maybe we were all just glad it wasn't snowing.

The run course was well-designed except for a few blind corners and one oblivious runner (me) who missed an obvious turn.  The 5K/10K began half an hour after the duathlon, which let all of us see who we were really racing against.  That wind was blowing from the north, and the bike route was an out-and-back...to the south.  Which meant 30 MPH out and 12 MPH back if you were one of the stronger riders. 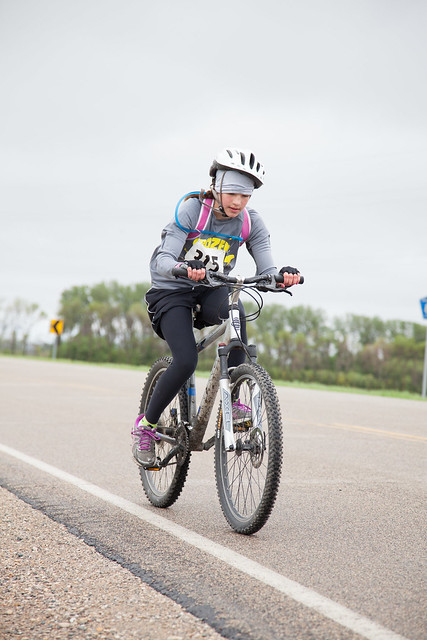 What's that mean, anyway?  "Stronger riders."  The fastest riders?  The riders able to snake in between the air molecules and eke out a little more speed?  I think we've got it wrong.  There were some physically powerful riders out there, but they may not have been the strongest.

For the last few years, I've been involved in the organization Ground UP Adventures, the goal of which is to get youth into adventure-based activities.  Three of the youngsters who have been there from the beginning (back when the local youth climbing club first started) are Erin and Megan (sisters) and Lucy.  They're 13, 11, and 13 (or so) respectively.  The reason I bring them up now is that they were there Saturday at the duathlon, not to cheer or compete as a team, but to each do the full race (5K/25K/5K).  They finished the race, on a day when riding into the wind was so tough that three or four miles an hour (what they could muster at times) was barely enough to keep upright.

They got up early enough to start a race at 8 AM on a Saturday.  They pushed through two 5Ks (the first of which they had ever done back in February), what must have been an excruciating bike ride, and what I find most impressive, two transition areas.  Two easy places to drop.  Two places to stop and relax (and there was cake!).  But they didn't (you can check the results).  They kept moving and kept racing.  Megan came in from the bike leg, barely moving, and her only question was "Do I have time to finish?" before taking off like a rabbit. (I only wished I looked as fresh into my second run.)

I'm super impressed.  I'm writing all of this because you should be too.

I understand why we push kids into team sports (because it's easy, because their friends are doing it, because it's what we did), and I know these girls play soccer and volleyball and all those "regular" things.  They've done shorter adventure races on other youth teams and been successful.  But the thrill of being out there on your own, and it being you against the wind, and knowing you want to push as hard as you can with nobody else to fall back on, I think that's important, and maybe they're realizing that too. 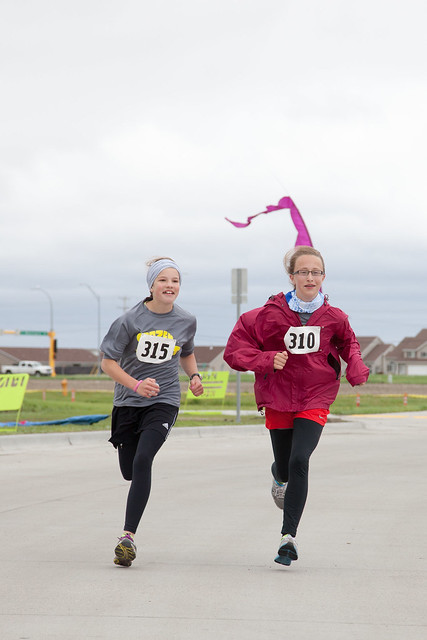 All photos by Wes Peck.